B-Square Engineering is the first to offer a Terminated Folded Dipole antenna, truly optimized for amateur radio use.

The B-Square Engineering Terminated Folded Dipole reinforces that fact., an antenna that provides solid performance and extraordinary value in one package.

Attach your coax via a standard UHF connector and you are ready to start communicating. 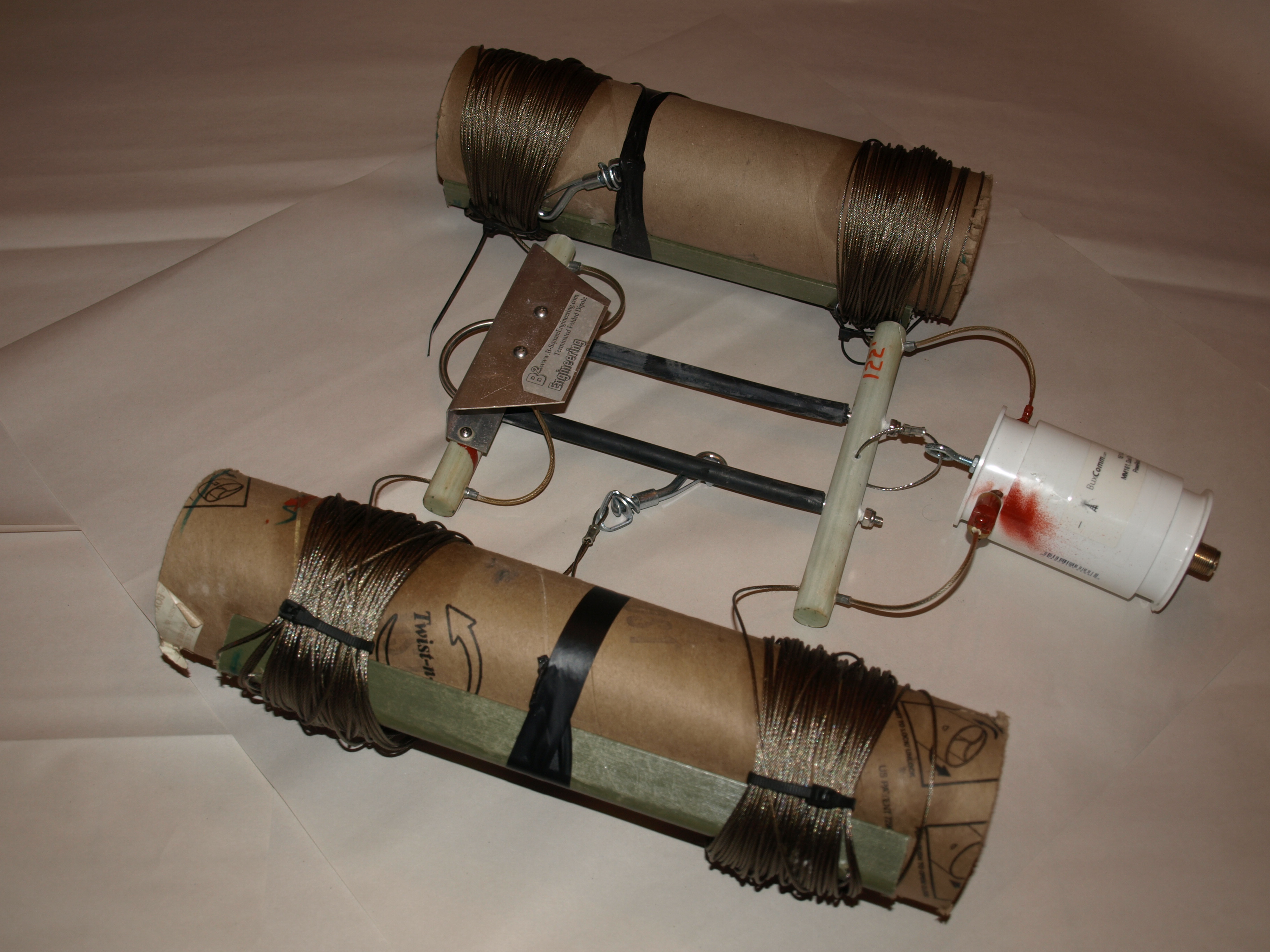 Like all B-Square Engineering products, the Terminated Folded Dipole is built to give a lifetime of satisfying performance, all for a remarkably low price. It's the perfect choice for anyone wanting the greatest capability for the least expenditure

And you buy with confidence! We offer 90-day refund privileges on all purchases. 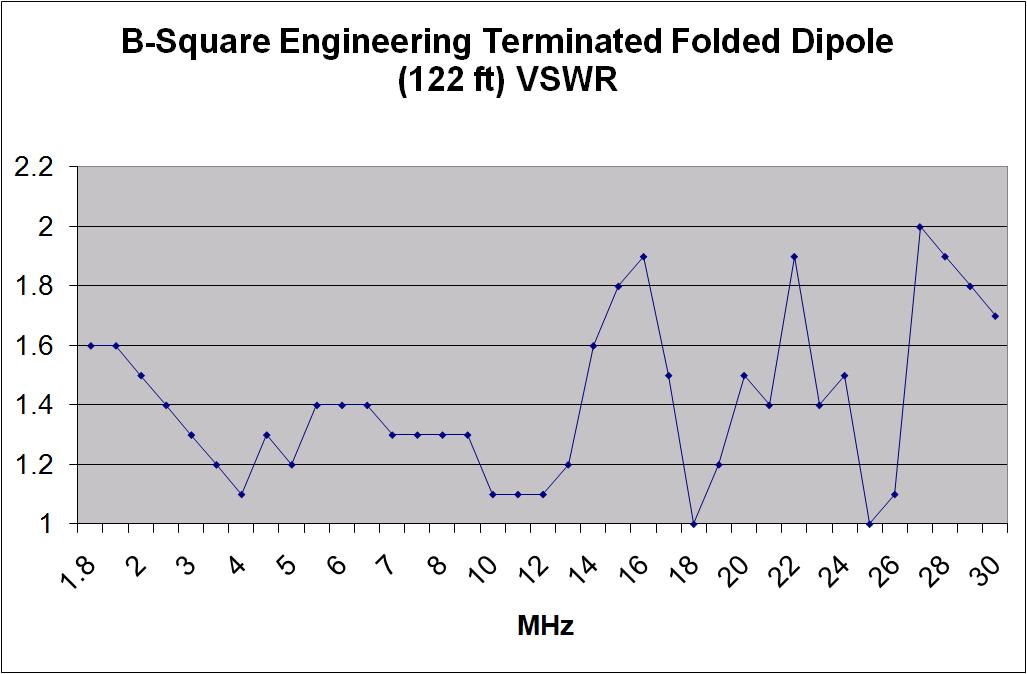 Why use a Terminated Folded Dipole antenna?

1. Bandwidth: The B-Square Engineering Terminated Folded Dipole provides complete coverage of any frequency from 1.8 MHz to 30 MHz without any gaps in coverage and without the use of a tuner. VSWR remains below 2:1 throughout the range of 160M to 10M.

2. Ease of installation: The B-Square Engineering version of the Terminated Folded Dipole is 122 feet long. Although performance can be enhanced at high mounting heights, it performs well at heights as low as fifteen feet. If you have the means to install an eighty meter dipole, thirty feet high, this antenna will replace it neatly. String it up with a 50 ohm feed-line and start talking. Its great for field day activities or for those of us that live in town and an unable to hang an antenna sixty feet up.

3. Foolproof tuning: Have you ever jumped bands to chase rare DX, only to find your antenna is tuned to the wrong band. With the terminated folded dipole you can switch bands as fast as you can change the frequency on you transceiver. The antenna system requires no attention.

4. Value: With a B-Square Engineering Terminated Folded Dipole, it is possible to work all the HF bands with one antenna, one feed-line and one installation without the expense of a tuner.

5. Forgiving of Real World Issues: Not only will the Terminated Folded Dipole continue at low installation heights, it is less effected by nearby obstacles than most any other choice. Although this does not mean that it will offer excellent performance in all installations, it can be counted on to deliver when dipoles and doublets have problems.

6. Enhanced RX Signal to Noise Ratio: Seeing is believing, when everyone else is failing to pull a signal out of the mud the Terminated Folded Dipole delivers the signal with S-units to spare.

a. In 1949 Mr. G. L. Countryman introduced the Terminated Folded Dipole to the public (QST Magazine, Jun-1949). He had been involved with its development by the Navy in WWII. In his article, he disclosed dimensions for an antenna that he suggested should work for amateur radio use.

b. Since then, the Terminated Folded Dipole has appeared in several publications, articles and textbooks. In all of the texts we've been able to find, the original dimensions cited by Mr. Countryman are presented as the design parameters for the amateur radio frequencies. Meanwhile no effort is made in the texts to explain how the antenna is intended to work. Nonetheless, the dimensions suggested in 1949 have been used as the design parameters for thousands of antennas built for amateur radio operators ever since. All the while, thousands of the same antennas have been sold for use in government and military installations.

c. Debate has raged for generations. Several favorable articles can be found, mostly written by radio amateurs that have used the antenna. Generally they sing the praises of the antenna, citing the contacts they've been able to make when other offerings failed. On the other hand most of the articles critical to the Terminated Folded Dipole, tend to be centered on mathematical modeling. Using the design parameters, mentioned above, respected writers have concluded the losses on the lower amateur frequencies were excessive and discouraged the use of the antenna.

d. In 2008, B-Square Engineering began looking at the Terminated Folded Dipole antenna. Our primary objective was to find a technical answer to the question: Why are so many operators happy to use an antenna that the math indicates is a mediocre performer?

a. When we first modeled the Terminated Folded Dipole we used the same dimensions everyone else has used. We concluded that the antenna would perform on the amateur frequencies even at low mounting heights. This ability to perform in compromised installations explains why so many operators like it. However we did confirm what the writers have said, in that losses get high on the lower amateur frequencies.

b. We also discovered that, in using the traditional dimensions, there are pockets of excellent performance, albeit not in the main ham bands. The areas of the best performance tend to fall in the HF aeronautical bands. This, coupled with the history explained above, is very likely the key to unlocking several mysteries. It is our conclusion that the Terminated Folded Dipole is an antenna that was designed by the government, for the government. Mr. Countryman's article in 1949 disclosed an antenna that would work on the ham bands, NOT one that was optimized for the ham bands. With this in mind we set out to take a sixty year old design and optimize it for the typical amateur radio operator.

3. What changes were required:

a. The first change was a simple adjustment to the length. The popular version of the Terminated Folded Dipole is ninety feet long. We extended this length to 122 feet. At this length, using stainless cable, the antenna becomes a resonant folded dipole on eighty meters. As such, the voltage across the terminating resistor finds a null and no current flows. Since there is no current across the resistor, there is no power consumed (or lost across it). This condition is true for all the higher resonant frequencies, providing a no loss condition on 80, 40, 20, 15 and 10 meter bands. The added length does a couple of things to improve performance on 160 meters. Since the 122 feet is folded back on itself, a half wave of wire is there to radiate. Second, the added length reduces the drop off loss that would be seen on a ninety foot model. When it comes to low end performance on any Terminated Folded Dipole, there is no substitute for wire. The extra length adds performance to the WARC bands as well.

b. The second change we made was to increase the input impedance. Traditionally this antenna is fed with a 600 ohm feed. We adjusted the spacing and increased the impedance to 800 ohms. These changes tend to enhance gain on the higher bands (20 thrrough 10 meters).

What if I don't have a big enough lot to hang a 122 foot antenna?

We offer two other standard versions, one at 66 feet and one at 33 feet. The sixty-six foot version is built around a resonant 40 meter antenna and performs well on 80 meters. As for 160 meters, consider it lost. Although it will load up well on 160 meters, about the best you can expect is to get out better than the folks that are trying to run mobile.

As for the thirty-three foot version, figure on losing the 80 meter band as well. As mentioned above, there is no substitute for wire.

Will the antenna work 6 meters with a tuner?

The short answer is yes, but there's a limitation that needs to be understood. There are plenty of folks out there, selling Terminated Folded Dipoles that are quick to say that you can add a tuner and take off on six meters. What they don't tell you about is the balun loss. A high impedance balun is doing well to cover 1.8 MHz to 30 MHz. We've not found one that extends the range to 54 MHz. A tuner will not correct balun losses at 50+ MHz. With that said, the answer is yes, as well as anyone else's.

Return to the Antennas Page